How does ReachMobi celebrate a successful July? With a lot of beer and barbecue, that’s how!

The ReachMobi team left work early on Thursday to get things started around 4 PM at Char Bar, as the company treated the staff to food and drinks to celebrate our awesome month of July, where our web push notifications service exploded way past revenue projections!

Char Bar is located on Pennsylvania Avenue, just a short drive from the ReachMobi headquarters. Char bar is housed in a big space with a retro vibe. Their menu specializes in barbecue and southern eats with a modern twist. They serve cocktails in Mason jars, and that is more than fine with us!

The staff set us up outdoors in the giant 10,000 square-foot beer garden on an evening that couldn’t have been more perfect.

We waited anxiously for the food to arrive while we temporarily satiated ourselves on copious amounts of liquid libations of enlightenment (i.e. alcohol). They have a ton of craft beers… And did I mention those Mason jar cocktails?

When the full spread of food arrived, it was a feast for the eyes that would soon turn into an explosion for the taste buds… Barbecued pork butt ends, a delectable rack of ribs, sweet potato fries, hush puppies and fried pickles. The food was prepared to perfection.

And if this batch of southern comfort food had been any more comforting, they would’ve had to roll out beds for everyone!

After dining on pure deliciousness, and after a few staff members went back for scrumptious seconds and thirds, the staff got involved in some of the outdoor games.

All Fun and Games

The ReachMobi team played a highly competitive and dangerous game of bean bag toss (Cornhole). Don’t worry, no one got hurt, but we had a whole heck of a lot of fun! The reigning champions were the tag team of Chad Wessel and Ryan Schaar. It must be mentioned that the judges on the scene noticed several “suspicious” plays.

Spectators and players alike had more and more drinks. Everyone kept talking throughout the night about how beautiful it was!

Speaking of drinks… Some of our team managed to keep the party rolling past midnight!

All in all, it was a fantastic evening, celebrating our amazing July and success of web push. We can’t wait to celebrate August!

"ReachMobi is far from a typical workplace. To get a better understanding of just how different of a workplace culture the company has, we sat down..

Our Work-Life Balance is What Makes Working at ReachMobi Great!

In ReachMobi's mission to innovate and excel, we know that it takes the best team to get there. We also know a company is only as strong as its.. 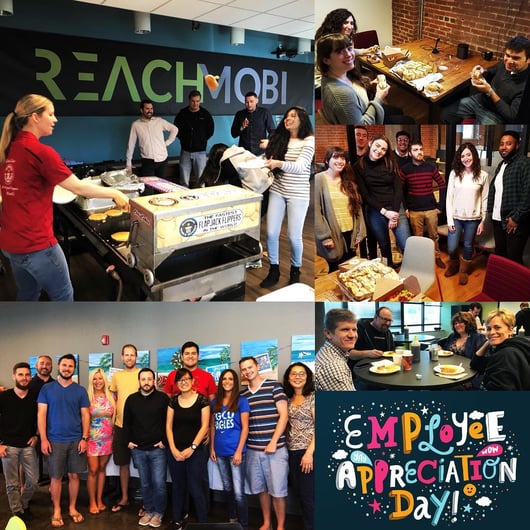 What it Means to Work at ReachMobi

There’s lots of energy going around at ReachMobi. We live in a fast-paced environment here, but we also know that recharging our..

An industry-leading mobile app developer, ReachMobi works tirelessly to connect users to a mobile experience that is completely tailored around the end-user.